The Emergency Budget and Mini Budget was announced today 23rd September by Chancellor Kwasi Kwarteng.  His announcements come amid the Government’s growth plan vowing to break the ‘cycle of stagnation’

The ‘Emergency Budget’ and Mini Budget has seen the biggest assault on the tax burden since 1972.

The Chancellor said during the mini budget and emergency budget that this is part of a long-term challenge.

‘Growth is not as high as it should be,’ he said. ‘We are determined to break that cycle. We need a new approach for a new era.’

The changes are not technically a Budget, but a ‘fiscal event’

Worth noting, the Bank of England pushed up interest rates by 0.5 percentage points to 2.5 per cent yesterday, the highest level since 2008. But it surprised many by stopping short of a bigger increase, suggesting that UK plc is already in recession.

As we covered in last months newsletter, bills at a typical household will be £2,500. The government is determined to help with the cost-of-living crisis – but the chancellor admitted the price tag will be £60billion just for the first six months.

The two-year freeze on energy bills for households and businesses announced earlier this month could cost more than £150billion by itself, while the tax cuts could add a further £50billion to the tab

The new chancellor shared further details on how much it will cost to deliver October’s cap on energy prices.

Prime minister Liz Truss has said unit rates and standing charges on default tariffs will be frozen from 1 October for two years. This means a household will pay an average of £2,500 a year for energy usage until 2024.

The previously planned cap had been set to cost households an average of £3,500 for an annual energy bill, so the freeze will save them about £1,000 each year.

We have more detail on the energy price freeze.

Starting today the government has announced a permanent reduction in Stamp Duty; the amount of tax you pay when buying property or land in England and Northern Ireland.

The government hopes that cutting stamp duty will stimulate the housing market by encouraging people to buy property.

A temporary stamp duty holiday had been introduced during the pandemic and house prices soared. Prime minister Liz Truss has previously said that reducing this tax is “critical” to economic growth.

‘The steps we’ve taken today mean 200,000 more people will be taken out of paying stamp duty altogether. This is a permanent cut to stamp duty, effective from today.’

According to the most recent Office for National Statistics (ONS) figures, the average UK house price leapt by 15.5 per cent annually in July, marking the biggest increase in 19 years.

It means there are now just two rates of income tax, the basic 20p rate and the single higher rate paid by those earning more than £50,000.

That means a tax cut for over 31 million people in just a few months’ time.

‘From April 2023 we will have a single higher rate of income tax of 40 per cent,’ the Chancellor said.

‘This will simplify the tax system and make Britain more competitive. It will reward enterprise and work. It will incentivise growth. It will benefit the whole economy and the whole country. 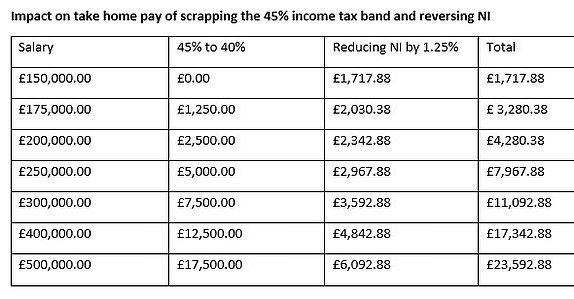 Yesterday the government confirmed plans to reverse the 1.25% rise in national insurance contributions.

In April, national insurance contributions increased by 1.25% for both employees and employers. But this will be scrapped on 6 November.

This means 28 million workers will have more money in their pockets. On average, each worker will get an extra £330 in take-home pay over a year.

The increase in the national insurance threshold, which came into force in July, will remain the same.

The Government announced as part of the Emergency Budget and Mini Budget that they are reversing the 1.25 percentage point increase in dividend tax rates applying UK-wide from 6 April 2023, according to the growth plan document.

Alongside the reversal of the Health and Social Care Levy, the ordinary and upper rates of dividend tax will be reduced to 2021-22 levels of 7.5% and 32.5% respectively.

One of the announcements of the mini budget is the cancelling of a planned increase in Corporation Tax.

In last year’s Budget, former Chancellor Rishi Sunak announced that the profits levy would increase by six percentage points to 25 per cent in 2023.

The Chancellor said that the increase would now not go ahead, saving firms £19billion and giving the UK the lowest rate in the G20.

The Chancellor told the Commons:

The Chancellor confirmed during the Mini Budget and Emergency Budget that the creation of low-tax, low-regulation investment zones in up to 38 areas of the UK, with new startups enjoying breaks such as exemption from business rates.

The Government is in talks with dozens of local authorities in England to set up zones in order to speed up the rate of building.

Planning rules will be liberalised, and the sites will get tax breaks to encourage firms into setting up.

More details on how areas can bid to take part will be set out by the Department for Levelling Up.

The 38 areas in discussion to become an investment zone are: